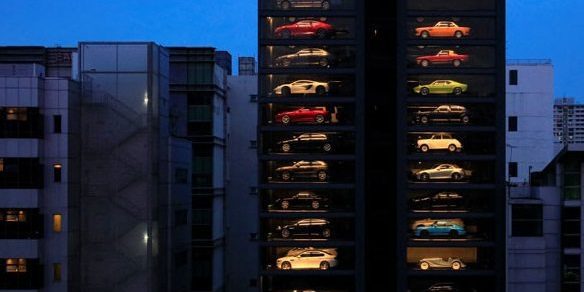 Vehicles on offer run from modern luxury sports cars to classics, including a 1955 Morgan Plus 4.

According to the company, customers on the ground floor choose from a touchscreen display which car they want to see. The car arrives within one to two minutes using an advanced vehicle retrieval system.

The vending machine format aims to make efficient use of space in land-scarce Singapore as well as standing out from the competition, said ABM General Manager Gary Hong.

“We needed to meet our requirement of storing a lot of cars. At the same time, we wanted to be creative and innovative,” he told Reuters, adding that developers have shown interest in using the company’s Automotive Inventory Management System for parking services.

US company Carvana also uses vending machine-like towers to sell used cars. In March, it opened an eight-floor facility that holds up to 30 cars in San Antonio, Texas. In total, the company has four locations across the United States, with the first car vending machine opened in late 2015. Carvana customers can drop a coin in the slot and pick up their new purchases at the vending machines or have the cars delivered directly to their door.

Have a Question?
Go to Top
Request A Call Back